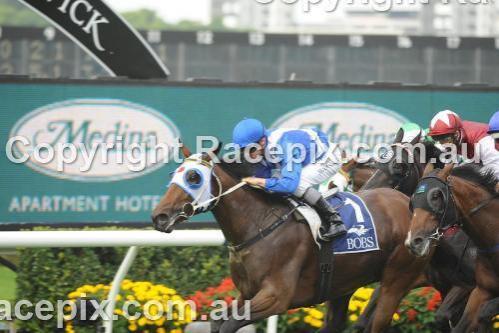 On Saturday   Dear Demi won the $100,000 Listed Medina Apartment Hotels Fernhill Handicap (1600m) at Randwick, and this was just the preliminary for the main mission, the $400,000 Group 1 Champagne Stakes (1600m) next Saturday.
Dear Demi was well ridden by James McDonald who settled her in third after the start and then allowed her to ease back to fourth as Trophies took the field along closely followed by Proverb.
McDonald improved his position as they approached the main turn but four wide. This allowed him to be in the middle of the track that has received 155m of rain during the week, but which was in remarkably good condition after a drying day on Friday.
There was a line up across the track with Trophies still leading racing outside Dear Demi and Proverb inside. McDonald waited until the final 200m and then he asked the filly to step up.
She responded well and with 50m to run Dear Demi burst through to take the lead and win with a long neck margin.
Trophies did well to retain second with Proverbs third, the margin a half-length. Fiveandahalfstar was fourth and Solemn fifth.
The time was 1.37.10 on the Heavy 8 track, which was upgraded to a Slow 7 after the race, with the final 600m in 36.04. Dear Demi paid $3.70 on NSW TAB as favourite.
“She is a pretty good filly and we have had no real luck with her and a few things have gone wrong without being serious. But I think she is a lovely staying filly,” said Conners.
“She definitely got headed and full credit to the filly she fought really hard and she has come away really well with a deserved win,” said McDonald.
“I had not really gone for her until the last furlong (200m) as having a ride on her last start I learnt a lot and she really found over the last furlong and the extra furlong today was really going to help.
“She is a tough filly and a mile (1600m) will really suit her,” he said.
“Clarry has always had wraps on her and for Clarry to pull one out of the Slipper for next Saturday for the Champagne as Clarry and the Slipper go hand in glove says it all,” said Singleton.