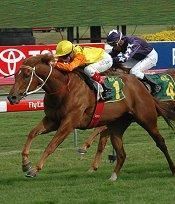 The Group II win in the Stan Fox Stakes by Decision Time was tinged with sadness when the three-year-old returned to scale with blood in both his nostrils at Randwick on Saturday.

Clarry   had just been discussing the horse’s upcoming Melbourne campaign which is now over, having incurred an automatic three month racing ban.

Decision Time’s jockey Craig Williams said he was shattered to find the horse suffering when he pulled up.

“I don’t know when he went, but on pulling up, I saw the blood,” Williams said. “He’s just too gallant and it wasn’t going to stop him.”

Decision Time’s win was his sixth from 11 starts and took his earnings past $1.1 million.

Conners paid tribute to his unassuming horse that for so long hasn’t been regarded as highly as his record deserves.

“The experts all had him running fourth,” Conners said. “They tipped this, that, they even had the clerk of the course running third and him fourth.

“It just amazes me, he’s a horse that’s go no wraps on him, but he keeps stepping up and getting it done.

“From day one he’s been a good gutsy horse and has deserved more recognition than what he’s gets, a bloody good honest horse.”