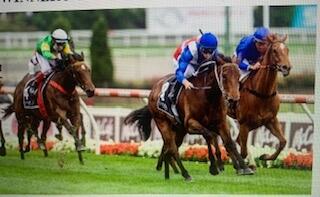 I got great satisfaction on Saturday watching Mokulua winning at Moonee Valley as I knew she had ability but bad barriers and things going wrong she had not been able to show but all the stars aligned on Saturday.

James McDonald credits super filly/mare Dear Demi for helping to put him on the map almost a decade ago, so it was fitting her blue blood daughter Mokulua gave the star hoop some much-needed consolation on a tough Cox Plate day.

Just hours after his Cox Plate favourite Zaaki was scratched on race morning, McDonald was able to bring up a race-to-race double when Mokulua won the Group 2 Fillies Classic (1600m) immediately after Generation’s effortless win in the Group 3 Red Anchor (1200m).

Mokulua – a daughter of Redoute’s Choice out of star filly/mare Dear Demi – had been a six-start maiden leading into the race.