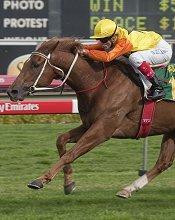 Gun three-year-old and Decision Time may have been beaten in a barrier trial at Warwick Farm but  signalled he are heading for autumn carnival riches.

Decision Time  went around in the same 800m heat on Monday and filled the placings behind La Remlap.

The trial marked the first public appearance for Decision Time since he was forced out for a mandatory three months after bleeding when winning the Group Two Stan Fox Stakes (1400m) in September.

He sat just off La Remlap in Monday's 800m hitout and wasn't pressured to the line, finishing 1-1/4 lengths from the filly in second.

Clarry Conners said he ran out of time to have last year's Golden Slipper runner-up ready to resume in Saturday's Group Two Royal Sovereign Stakes (1200m), with the trainer now looking to the Listed Fireball Quality (1100m) at Rosehill on February 26 for Decision Time's return.

"I was very happy with him and Jim (Cassidy) said he went good, too. He's been passed to race again."

Decision Time has won six of his 11 starts including stakes wins in the Listed Black Opal as a two-year-old, and the Listed Heritage Stakes (1200m) and Group Two Stan Fox (1400m) as a spring three-year-old.